Brief history of the Congregation 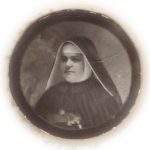 Maria Josefa Amalia Sofia Iaconis was born on 18 November 1867 in southern Italy, at Casino di Calabria – today known as Castelsilano – in the Province of Catanzaro and the Diocese of Cariati. She was the daughter of Maria Antonia Spina and Luigi Antonio Iaconis..

Maria Fabiano, her mother’s stepsister, born in 1849, would later become the Foundress in her native town of the Congregation of the Sisters of Charity, Daughters of the Immaculate. Mother Iaconis would later found a branch of this Foundation in Argentina.

As a young girl, Sofia took part in the apostolic initiatives for children organized by her aunt. Time strengthened in her a love and admiration for the Daughters of the Immaculate. As a novice at the age of 19, she took the habit and received the name Sister Maria Eufrasia. In 1887 she moved to Rome. This beginning was not easy for her as she soon had to assume duties of responsibility, among others, that of Local Superior. She played a leading role in the Congregation’s effort to obtain approval but this process became unexpectedly complex from 1892. 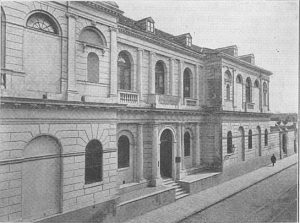 In 1893, while these women religious were beginning to experience difficulties in Rome, the Daughters of the Immaculate received a request from Archbishop Aneiros to take charge of the Italian Hospital of Buenos Aires, Argentina.

Mother Fabiano realized that the time had come to encourage some of her daughters to spread the charism in other lands. With foresight, she saw that her niece would better sustain the Institute by strengthening it from afar rather than defending it in Italy. When Sister Eufrasia Iaconis was 25 years old, she was appointed Superior of a group, which consisted in eight women religious altogether. They left Rome for Genoa on 2 August 1893 and set sail for Buenos Aires where they arrived on 6 September. Sister Eufrasia and her group of women religious thought that nothing serious would hinder the mission that they had come to undertake in the Italian hospital. However, misunderstandings soon arose on account of the anticlerical position of  the Board of Directors of that healthcare facility.

The Institute’s problems in Rome intensified and this worry was a catalyst for Sister Eufrasia’s actions in South America. Those who knew her regarded her as a well balanced woman who was kind, patient and strong who walked at the head of her daughters, leading them with her lively example.

Some time later, the Board of the Italian Hospital of Santa Fe and Colonies approached the Daughters of the Immaculate to ask them to take charge of this centre. In Rome, the Superior General, Mother Fabiano, accepted the request and in September of 1894 a group of women religious had arrived in Buenos Aires, some of whom went to Santa Fe. The following year, a third group of Sisters was expected in connection with another request from Santa Fe regarding the Kindergarten of the institutes  of Children. 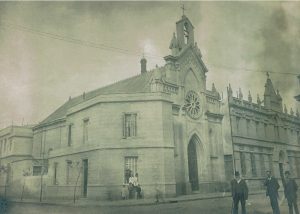 Mother Eufrasia then moved to the next stage of the Institute: its establishment. Between 1896 and 1899 she started to open her own early institutes: In Buenos Aires, a Novitiate and School which would shortly later have their own buildings at number 3470 Lavalle street; in the Eloy Palacios neighborhood of Rosario, she accepted the invitation of Bishop Boneo of Santa Fe to install a community with the aim of establishing a future school, as  in fact did happen; at Concepción del Uruguay, Entre Rios with the permanent support of Bishop de la Lastra, the congregation ran a nursery school which was later donated to it and extended with a school. Meanwhile, at the request of the wife of President Sáenz Peña, Mother Eufrasia accepted to take charge of the new Hospital of Belgrano, the Pirovano, in Buenos Aires, even though they had begun negotiations in Córdoba with a commission of women and representatives of Bishop Toro to take charge of the Casa degli Esposti, for orphan children in that city.

Everything was going well in Argentina. In Rome however, after some anonymous accusations and inquests on Mother Fabiano, a canonical visitation was sent in 1900 which was followed by a report against the Foundress which led to the dissolution of the Congregation by a decree dated 30 January 1901. Faced with this situation, the Superior General – forced to leave her duty – called her niece, Mother Eufrasia to Rome to try to save what could be salvaged. In agreement with the Internuncio and with the Archbishop, she left without communicating to the women religious the news of the dissolution. Before retiring herself from her work in silence, Mother Fabiano made her the depositary of the only thing and the most precious thing that survived intact in the Institute: the charism.

From mid-1901 to August 1902, as she experienced the Roman solitude, Mother Eufrasia knocked on every door, meditated each advice and practiced her capacity to lead to the utmost, in an effort to find a way to make the dissolved Institute, the Congregation, breathe life again. She applied herself to begin again, in another form, with another name, retouching the habit and the Constitutions. She had branded in her soul that what had given birth to this religious family would remain intact, and she nurtured that charism in her heart and in her hands.

In 1902 she took the first steps to request to form a Diocesan Congregation in Rome. This group which did not prosper despite the unconditional help of the Delegate for Monasteries Bishop Grazioli confirmed in Mother Eufrasia the certainty that she had to find a Diocesan solution in Argentina. She returned to Bueno Aires with this conviction. 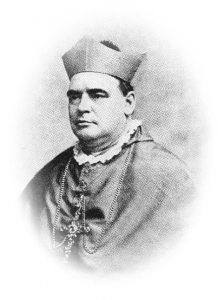 In that country, the Internuncio Sabatucci’s interest ended with the support of Archbishop Espinosa, who realized that Mother Eufrasia was running something precious and profound. On 31 August 1902, as soon as she returned, the Archbishop received her together with Father Vicente Gambón, SJ. The three agreed on the need to give international stability to the group of Sisters of the dissolved Institute who were present in four Argentinian Dioceses. 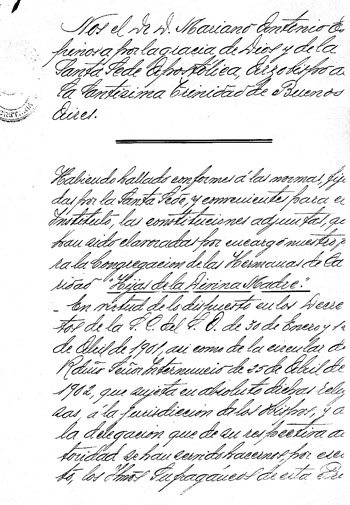 On 24 September 1904, the Diocesan Congregation in Buenos Aires was given approval, initially with the name by which it was known in Rome, but very soon Mother Eufrasia was able to obtain the support of the Archbishop before Pope Pius X, for the authorization to use the name of the earlier Congregation. They recovered it as it was written in the petition: Daughters of the Immaculate Conception.

In 1902, the building of the Mother House was inaugurated and the adjacent chapel immediately became the spiritual centre of the area. During the new institutional stage, she had to consider requests coming from other dioceses. Around March 1903, a Community of four sisters took charge of Our Lady of Guadalupe kindergarten of Santa Fe founded by Bishop Boneo. In 1903, she also bought some land at Concepción del Uruguay, for the future Sagrado Corazón de Jesús School. Also that same year, she received a donation in Córdoba, where Our Lady of the Snow School (Nostra Signora de Nieva) would be built. In 1904, Mother Eufrasia returned to Santa Fe and began the construction of the Kindergarten.

By 1911, the Mother realized that the increase in works and properties, and all the apostolic work that they implied, did not match in the same proportion to vocational growth. That same year, trusting in Providence and after prayer and consultations, she left for North Italy accompanied by Sister Estanislada Tognoni who was well suited thanks to her background and knowledge of the Italian environment where she had been educated. Only through a thorough reading of the Mother’s letters can one understand the suffering, loneliness and great uncertainty of that trip. Finally, a parish priest in Milan asked her to begin a Sunday Oratory. 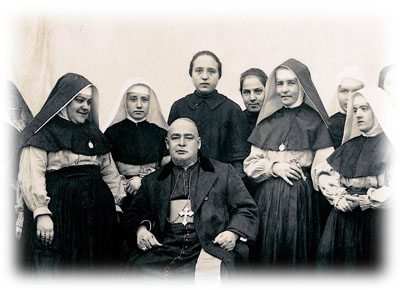 It was the awaited opportunity because from there, came the permission of Cardinal Andrea Ferrari for the desired Foundation. As practical as ever, Mother Eufrasia began the Novitiate on a second trip. Among the Aspirants, came Giuseppina De Micheli who took the name of Sister Pierina and whose cause for Canonization is currently underway in Italy. Sister Pierina was the propagator of devotion to the Holy Face of Jesus.

The summit of Calvary was approaching for Mother Eufrasia. In 1913 in Milan the symptoms of her illness began to appear and they would continue to worsen on her return to Argentina. But Mother did not stop, faced with the commitments of the Congregation. She knew that she had but a short time to transmit to her daughters, the charism’s total potential; her complete gift of self to God and to her brothers and sisters, down to the smallest details.

On 2 August 1916, in the Pirovano Hospital – where she had been admitted a few days earlier – Mother Eufrasia Iaconis died surrounded by her daughters and several priests. The wake, the solemn funeral and her burial highlighted the affection and admiration people felt for this exceptional woman religious. As some sisters wrote: “Various people accompanied us to the School feeling privileged to have been present at the moving and sad celebration…and it could not have been otherwise as she enjoyed the general appreciation and everyone saw uncommon virtues in her […] Despite the fact that some among you did not have the opportunity to meet her, nevertheless through the fame of her virtues, you will have come to know and admire her.” 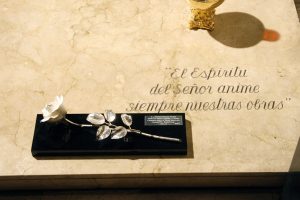 Mother Eufrasia was a strong minded woman who followed the rhythm of the Spirit. Her gaze transcended the immediate, perceiving that Argentina was the place for the Daughters of the Immaculate Conception, where the way of the Cross of circumstances had brought them and where the womb of the local Church received them definitively at the beginning of the 20th century.